This place shall be where I'll occasionally post some images (they are not drawn by me, if you got good ones do submit them to me) with a brief explanation of the lovely creatures within them. Hopefully you'll learn to love them as much as I did, for they gave me (and my scientists) a lot of trouble to create. 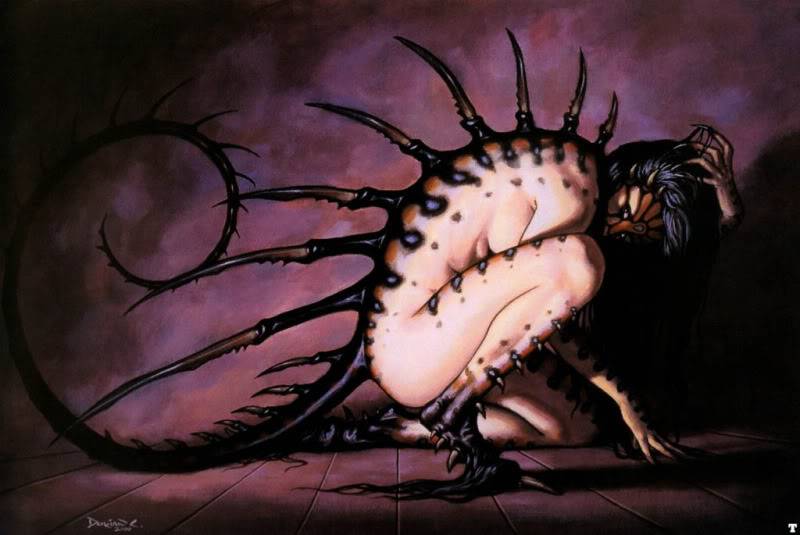 On this first Image you see one of my very first creations, the Infested. They are lovely creatures, born of nothing but pure love whose whole purpose is that of caring and tending to their master, obeying his every whim. Once humans carried from a variety of worlds to serve as lab rats for biological weapons and experimental mutation, they survived everything... Well mostly, they were twisted and deformed, but they became almost like most Xen, savage and vicious, thinking of nothing but to kill and feed. Of course after a few more experiments and more careful mutation, they became what they look like now, beautiful creatures with the strength of three humans, the skin is hardened too, becoming nearly invulnerable to regular close combat weapons, like knives and possibly swords. This of course is also good again the natural fauna of many worlds who possess nothing but their natural weapons, claws and teeth. To the, however it was given something very special, a parasite which give the owner of them full control over them. Still this creatures will act, unless specified otherwise, accordingly to what they judge best, having always the owner's best interest in their minds. They also have a very special capacity to understand the owner's needs or desires and will willingly do their best to make those needs or wishes come true.

Lately the development process of the Infested has been improved and less subjects die in the process of changing and adapting. Ignis took several of them to serve both as personal staff and bodyguards. Other are taken by high ranking officers for their own purposes. We are still far from mass production of such beautiful and useful creatures, but our development centers are working night an day towards this, so they can become available to every Xen citizen.